As with any music genre, jazz is so deep and various that listing only ten great jazz albums excludes so many outstanding ones out there. With this list I’ve chosen albums that are in my collection, are nice to listen to from start to finish, and as a whole demonstrate some variety.

I have excluded the vocalists because I plan on giving them their own category later on. The recordings found on the following albums are from 1939 to 1977. Some of these albums are classics, while others are less mainstream. This is in no particular order. I hope you enjoy.

I bought this record for a few dollars shortly after getting a mid-70’s Zenith console record player at a local antique store (A & R) at the turn of the century. It was my first jazz album, and I’ve played it too many times to count.

I Thought About You

Recorded and released on the Columbia label in 1961, Miles Davis’s sextet gets it done throughout. Miles is unquestionably one of the greats in jazz history, and this album shows you why. It’s beautiful, melancholy, pleasant, and romantic. It’s hard to pick my favorite. I would consider half the tracks to be upbeat, while the other three are slower and more mellow. The original album has six tracks, and the reissues add two more to the end.

Time Out is one of the most iconic jazz albums of all time. Originally released in 1959, it was groundbreaking because of its departure from 4/4 time. Take Five is the most recognized track on here, and rightfully so. In 1961, it reached #25 on the pop charts, helping the album climb to #2, a rare accomplishment for a jazz album at that time. Every song on here is so good and beautiful and interesting.

In addition to Take Five, my favorites on this album are Blue Rondo a la Turk and Strange Meadow Lark, which is the most mellow. Steve Race provides the liner notes on the back of the jazzy front cover.

This 1972 Prestige double LP is a compilation of recordings from 1951 through 1956 from one of the most heralded tenor sax players, who was also an elite bandleader. The cover is great. The Prestige label is cool, especially on the vinyl (logo in light blue and Prestige in yellow letters on the green circle). Liner notes inside the gatefold by Nat Hentoff provide interesting reading.

Although the sax can dominate too much on many sax albums, Rollins’ deep rich sound achieves a pleasant balance with the other instruments. St. Thomas is probably my favorite, which is the first of a baker’s dozen of tracks.

Love On A Two way Street

One of my favorite Grant Green tracks appears on this album: Love on a Two-Way Street.

Jimmy Smith is considered a giant among the greats of the Hammond B-3 organ. Released on his own Mojo label in 1974, Smith reminds his audience of this on the liner notes of the back cover.

Killing Me Softly With His Song

Lesser known and less upbeat than Root Down (popularized by the Beastie Boys), this album’s first song is a cover of Killing Me Softly With His Song, which is reason enough to own this. The other three are also worth a listen, especially Bro’ Pugh. 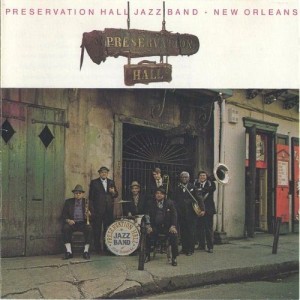 If you want Dixieland jazz, this one is great. The songs on this 1977 release from Columbia Records are either traditional hymns (Over in Gloryland), standards (Tiger Rag), or originals, such as the great track Good Blues.

This funky old style includes a full line-up of instruments. Most of the musicians in New Orleans, according to the liner notes, will simply state “Music for all occasions” on their business cards, which is a philosophy DJ Squared is all about!

7.  The Genius of the Electric Guitar — Charlie Christian

Charlie Christian, who lived to be only 23, is widely regarded as a pioneer of the amplified guitar. These recordings are from 1939 to 1941 and were re-released as a compilation on Columbia Records in 1987. The liner notes give a great introduction to Christian, including the sad fact that Benny Goodman took credit for many songs that were originally created by Christian in jam sessions. Three of my favorite tracks are Wholly Cats, Royal Garden Blues, and Waitin’ for Benny.

This is one of my favorite artists and albums to listen to. Szabo plays a unique and hypnotic style where you can hear echoes of various genres mixed in. Almost every track is worthy to include in a variety of playlists. The title track and Gypsy Queen are great uptempo songs that are quintessentially Szabo.

Autumn Leaves/Speak to Me of Love is a combination of two ballads beautifully played — wistful and melancholy, but with that characteristic vigorous twang of Szabo’s guitar. Nat Hentoff again obliges the reader with good liner notes on this gatefold album released on Impulse! Records in 1966.

What a great front cover and album! Cal Tjader is a bandleader and plays the vibes on this one, with some great Latin percussion. Recorded and released in 1965 on the Verve label, Soul Bird: Whiffenpoof is the perfect lounge jazz album — light, laid back, and spirited, with twelve short and sweet songs.

I like to play The Whiffenpoof Song in any instrumental playlist, usually as a contrast to something else or as an interlude.

I’ll end on a good and mellow note with yet another classic album and album cover. Hub-Tones was released in 1962 on the Blue Note label and has two mellow ballads in Prophet Jennings and Lament for Booker with beautiful layers of trumpet and flute, as well as alternating solos. The remaining tracks are uptempo be-bop tunes.